Water Under The Bridge.... Literally....

November 02, 2015  •  Leave a Comment
Besides photography, which is absolutely my first love and true passion, I do love to fish.  Lately, fishing has been less than stellar, and quite a disappointment actually, but that is where I get to spend some time taking photos that I wouldn't be taking if the fish were biting :)  Whenever my husband and I have time, we like to spend a few hours fishing.  Mobile and Baldwin County both provide a wealth of fishing opportunities in many locations, including the Gulf of Mexico, Mobile Bay, and many lakes and rivers within a 50 mile radius of our home.  Last year we caught so many fish that we actually spent just as much time cleaning them as we did catching them. (Well, him more than me...)  Mullet were in abundance both via cast net and, by nothing short of a fishing miracle, catching them with corn and bread on a fishing pole in a river runoff, under a bridge, in a place you would never think that schools of mullet would gather.  So, let's fast forward to this year, where fishing has been a challenge.  For whatever reason we seem to repel fish rather than attract them.  I don't think we are alone in this entirely.  Reading some of the local forums some others seem to be having some runs of bad luck as well.

You probably are thinking... what in the world does this have to do with photography???  Well, there is where you get to be creative.  For example, that river runoff, under a bridge, where the mullet apparently like corn on hook at the end of a cane pole.... that's where I first learned to slow the flow of water and create some pretty incredible images of a less than incredible place.  It will forever be the best set of pictures I have ever taken, in my mind, because it was when I first became aware of how camera speed truly impacts movement, and if you do things just right then things look pretty amazing.  Now, in reality, they won't be the best pictures in the world... of this I am certain... however, to me they are special because I learned some valuable lessons that day when I went there to fish and, well, the fish weren't there to eat.

Below are 3 pictures, taken with my camera phone, on one of our fishing expeditions.  Now, keep in mind, this is true back roads fishing.  Not where the average person heads to fish, but it's pretty close to home and, for the most part, a great little location when you just want to unwind at the end of the day and don't have a lot of daylight left to fish in.  At any rate, these 3 pictures give you an idea of what type of environment this is and how just uninviting and unappealing it is, on first glance. 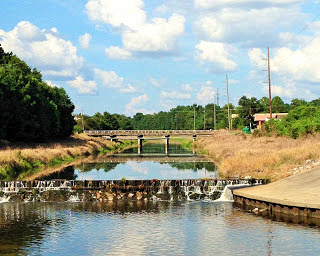 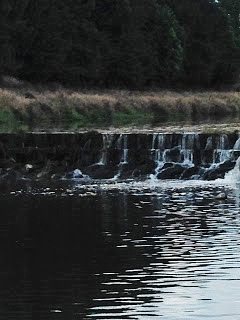 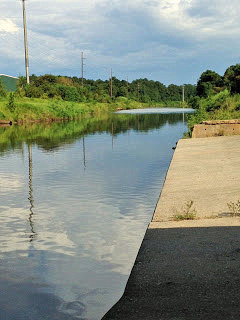 Now, let's fast forward to the creativity part of this blog post and how you can turn something not so exciting into something pretty awesome in the photography world.  These pictures give you an indication of the setting we were in and just how unappealing it truly is.  Well, even the most seemingly unappealing places to photograph do offer a glimmer of hope under the right conditions.

I was in search of a location to practice slowing the flow of water and looking for something along the lines of a waterfall.  Well, in my recollection of this area, there were no waterfalls that I had seen or heard of.  Then I remembered our little fishing spot and how I had seen water flowing from one level to another, over some rocks, creating somewhat of a waterfall effect.  Throw in a few rainy days, high water levels in the rivers and just like that you have a waterfall effect.

By being creative and using a little imagination something that was nothing spectacular at first glance became something so much better under the right conditions.  Sometimes you just have to think outside of the box to get the shots you are looking for. 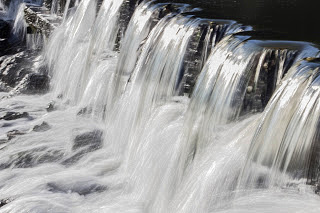